There has been a lot of buzz about Opportunity Zones recently and understandably so; it is the newest federal effort to create long-term investments in low-income urban and rural census tract areas. Once designated as a qualified Opportunity Zone, these places are able to receive investments through Opportunity Funds, which are created specifically to invest in these areas.

However, despite the existence of 8,700 total Opportunity Zones spanning 12% of all census tracts in the United States, there has been surprisingly little analysis to identify ‘ideal’ areas to invest in. Many articles published to date consist of top 10 lists recommending the major metropolitan areas in the US anyone could probably guess, which seems a disservice to the massive amount of areas elected as qualified Opportunity Zones.
My analysis sought to develop a rank system for all Opportunity Zones based on 5 economic indicators, and see if there were areas of above-average growth not commonly discussed. I believe the results showed that there are many Opportunity Zones across the US that ranked highly across all 5 indicators, many of those actually not being located on the coasts.

In aggregate, we found that areas in the Northeast and Southern regions in the US had the best performing overall areas, while pockets in the Midwest and Western areas showed significantly better performance vs. other similarly grouped areas. We also found that Unemployment and Median Value of Owner-Occupied Homes were the biggest differentiators in our dataset, with ranking deviations almost double of the other 3 indicators examined.

Method to the Madness

From the start I applied a more analytical approach to examining the Opportunity Zones and determine if there were potentially highly desirable investment areas that had flown under the radar. To start, I elected to pull 5-year (2011–2016) estimates from 5 datasets found via the US Census Bureau:

For this analysis the importance of each dataset was unweighted, meaning that all 5 rankings per census tract matter equally in the final ‘rank’ for each Opportunity Zone. Weighting the attributes and/or adjusting those included may result in profoundly different outcomes. Based on the attributes examined, there are indeed many opportunity zones showing favorable trends across these attributes, which can exist across the entire United States.

After doing this for all the Opportunity Zones, I wanted to see how it would look on a map. Since census tracts are really small geographically, I aggregated the results up to US counties, which reduced the dataset to a seemingly more reasonable 2,000 or so points. The result: 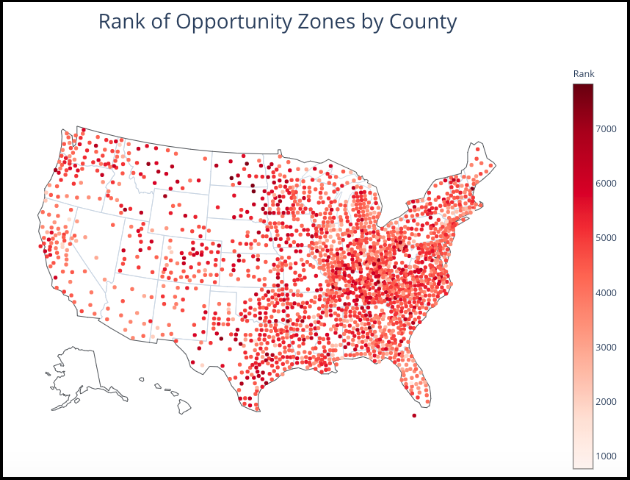 Looking at this visualization we can see……well, nothing. There is too much going on to yield meaningful insights from this map. Looking at this also made me question the lack of regionality taken into account — the ‘best’ census tracts are likely influenced by economic trends in neighboring regions over the 5 year timeframe.

Based on this I created code to automatically group together census tracts in similar areas. K-means clustering is a great method to achieve just this and after reading Carl Anderson’s post on weighted K-means analysis, I adapted it to my use case. My goal was to use each Opportunity Zone’s ‘Total Average Rank’ in order to influence where the center of each cluster would be drawn on the map.

To explain using Carl’s example, if there are 4 points on a map and one has a much higher ‘Total Average Rank’ than the others, the new point created will lean toward the highest ranked point:

The last thing I needed to do was figure out how many ‘clusters’ I wanted to create. Determining the ‘correct’ number of clusters is still largely an art more than a science, relying on the person’s knowledge of the problem and qualitative insights to determine an ideal amount. I settled on 25 — it provided the best tradeoff of visual digestibility while also evenly segmenting the US into areas large enough to generate macro-level regional insights. Here’s a final output overlayed with a Voronoi visualization to better ‘show’ how the regions were divided up:

To provide more context, here are the final breakdowns of how each cluster scored overall, higher ranks being ‘best’:

There were many interesting insights from the analysis, summarized as follows:

States like NY also had a surprisingly large concentration of high-rated Zones, seen by the skew in the graph below. Overall, ND and WY contained the highest rated zones of any state, with states like IL and NV having the lowest ranked concentration. 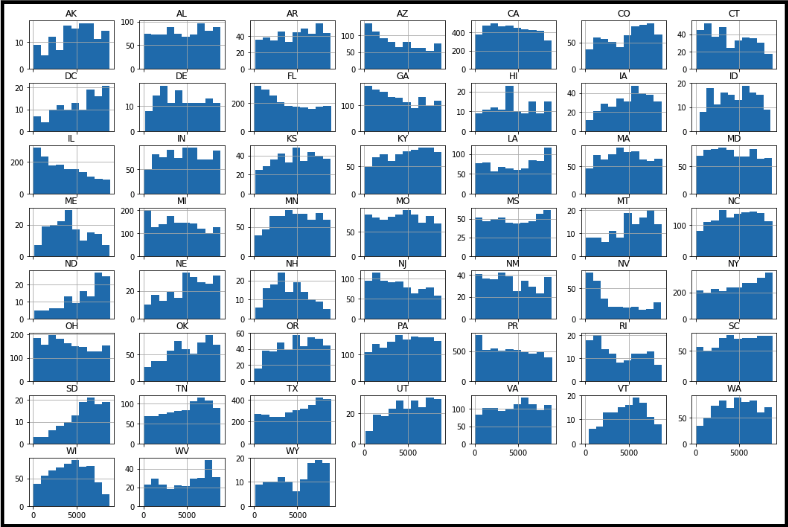 As a final note, this article was intentionally brief on the technical steps taken to generate the final dataset. Steps such as managing missing data in the datasets (imputation), creating ranks, cluster aggregation, etc., were not discussed but were major components in arriving to the final analysis. If there is enough interest I would be happy to dive into the mechanics in a future post. In the meantime, I have included an interactive ARCGIS map below for you to further explore the clusters along with other datasets to provide a jumping point for further analysis!

ARCGIS MAP WITH VORONOI AND LAYERS

Read our views what's going on in the blockchain and alternative investments industries, gain insights from our team of experts, and find out more about RealBlocks!

How Liquidity Can Enable Performance-Driven Decision-Making

Head to our learning center to receive helpful tips about investing, see what's going on in the blockchain and real estate industries, gain insights from our team of experts, and find out more about all things RealBlocks!

This site is operated by RealBlocks “Company”, which is not a registered broker-dealer. “Company” does not give investment advice, endorsement, analysis or recommendations with respect to any securities. All securities posted here are being offered by, and all information included on this site is the responsibility of, the applicable issuer of such securities. “Company” has not taken steps to verify the adequacy, accuracy, or completeness of the information. Neither “Company” nor any of its officers, directors, agents and employees makes any warranty, express or implied, of any kind related to the adequacy, accuracy or completeness of any information on this site or the use of information on this site. By accessing this site and any pages thereof, you agree to be bound by the Terms of Use and Privacy Policy.

Securities offered through North Capital Private Securities, Member FINRA/SIPC, located at 623 East Ft. Union Blvd, Suite 101, Salt Lake City, UT 84047. NCPS does not make investment recommendations and no communication, through this website or in any other medium should be construed as a recommendation for any security offered on or off this investment platform. You can review the brokercheck for NCPS here. This website is intended solely for qualified investors. Investments in private offerings [and startup investments in particular] are speculative and involve a high degree of risk and those investors who cannot afford to lose their entire investment should not invest in such offerings. [Companies seeking startup investments tend to be in earlier stages of development and their business model, products and services may not yet be fully developed, operational or tested in the public marketplace. There is no guarantee that the stated valuation and other terms are accurate or in agreement with the market or industry valuations. Additionally, investors may receive restricted stock that may be subject to holding period requirements. Investments in early-stage private companies should only be part of your overall investment portfolio. Furthermore, the allocation to this asset sub-class may be best fulfilled through a balanced portfolio of different start-ups. Investments in startups are highly illiquid and those investors who cannot hold an investment for the long term (at least 5-7 years) should not invest.